The Most Expensive Car Keys 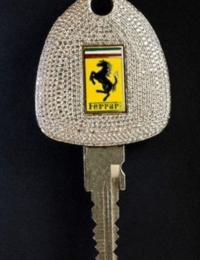 Most car keys are small and quite boring in appearance. However, manufacturers all over the world have found ways to make them more appealing. The best car keys design also come with high cost. The most expensive cars like Bugatti, Ferrari and Mercedes are the ones that have the most expensive car keys because of their luxurious and unique designs. These car keys come in various designs with a choice of studded in diamonds, crystals and any other desired shapes. People driving around in Porsches, Mercedes, Maseratis, Bugattis can also have the best customized keys to suit their style. The most expensive car keys are among the car accessories that complement the car’s good looks and with the help from www.seattlelocksmithpros.net, here’s some.

Have a look at the world’s most expensive car keys.

The Bespoke Ferrari Car Key is unique in many ways and made in a fancy design making it one of the most expensive car keys. The key is crafted with 1,160 flawless diamonds weighing seven carats each. For those who love class and luxury, then this car key is the best choice for you. The car keys can also be customized and if not enough for you, one can further customize their key fob in other desired jewel of their choice.

Alexander Amosu is a well known designer famous for his diamond studded Bentley car key which has more than 101 diamonds forming the infamous Bentley’s wings logo. Each diamond weighs 1.09 carats. With all its fancy features, the Bentley Diamond Car Key from Alexander Amosu qualifies as one of the world’s most expensive car keys.

This car key is handcrafted using top quality leather and combined with silver and gold. The Eng-i-Creations car key is the world’s fourth most expensive car key which give you value for your money because of its spectacular design.

The car key has enhanced features such as; its very own LCD player which is high resolution. The car key allows you to reset air conditioning in your car remotely. It also has the ability to indicate the car’s charge level and show the distance a car can travel before it needs to be refueled. The BMW i8 Futuristic car key is the fifth most expensive car key but it is worth its price.

The manufacturers have designed these keys individually studded with Swarovski and have diamond crystals on both of its long sides. The crystals are either black or pink and the keys are available with additional two standard keys which of course come with an extra fee. Apart from that, the keys also have special luxury boxes where they can be kept.

The Tesla Model S Car Key is one of the most expensive car keys but it is worth the spent because of its gorgeous design and features. The key is designed in a sleek manner with the Tesla S shape and has the ability to detect your car if it is turned on. The car key also has additional features which can be set according to the driver’s preferences for settings such as mirror position, starring wheel and the seat.

The most expensive car keys also come with luxurious accessories and better equipped models. These car keys are more common with men who love their expensive rides and want to explore the world of class.

Find Me on Google Plus